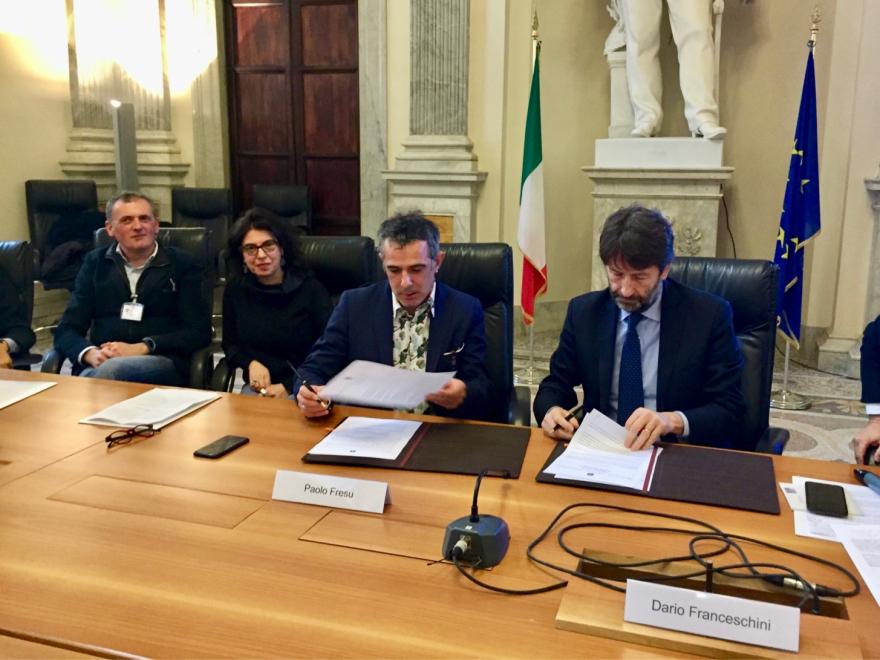 Yesterday 21 February a new protocol of collaboration was signed in Rome between Italian Minister of Cultural Heritage and Activities and Tourism, Dario Franceschini, and the newly established Italian Jazz Federation, gathering for the first time a number of stakeholders of the jazz sector in Italy including MIDJ, the association of jazz musicians, I-Jazz, the federation of jazz festivals, ADEIJ, the independent labels association and Italia Jazz Club, representing jazz clubs and venues. Paolo Fresu, the renowned Italian artist who has been at the forefront of the organisation of many important national jazz events in Italy in the last years including “Il Jazz Italiano per L’Aquila”, represented the Italian Jazz Federation at the meeting with the Minister.

The new protocol sets the basis of a collaboration for the promotion of jazz culture in Italy, specifically the “shared commitment in pursuing structural objectives that will expand the knowledge of jazz culture, considered as a shared cultural heritage and an opportunity for development of audiences and musicians, and that will promote its advancement and continuous growth”. Included in the new protocol are the support and safeguard of jazz cultural and educational value, the continuation of the special grant that in the last 2 years have designated ministerial funds specifically for the jazz sector, the creation of an “Italian Jazz Day”, as a follow-up of the events in L’Aquila and other areas damaged by earthquakes in central Italy, the promotion of new projects with local governments and with the tourism sector and other incentives and possible initiatives for supporting jazz in Italy.

Europe Jazz Network (EJN), the European Association of festivals, venues and support organisations with over 120 members all over Europe, considers this a very positive step for the valorisation and the promotion abroad of the many artistic talents present in Italy. EJN has helped the creation of the new Federation and will continue to support it establishing new collaborations and exchanges with similar realities around Europe and with its network members.

Giambattista Tofoni, EJN Network Manager, commented “It’s a historical event for Italy and all Europe and an important recognition to Jazz as an art form which is a fundamental part of the cultural industry, feeding it with its intrinsic creativity. I’m sure that from now on a lot of new possibilities will flourish for the benefits of the whole cultural European cultural ecosystem. Collaboration, sharing and networking are the keys for a common cultural European space.”